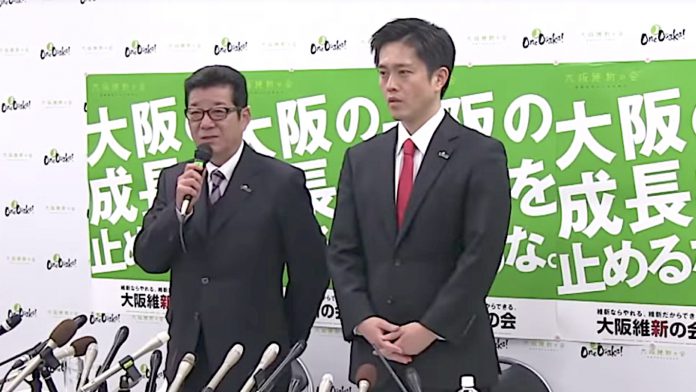 This comes at a delicate time in IR planning, as Governor Matsui had been proposing a quick process to select an IR operator partner for the city.

Some Japanese media are calling these the “cross elections” because Governor Matsui will run for the post of mayor and Mayor Yoshimura will run for the post of governor. This curious maneuver is necessary because under national laws if a governor or mayor resigns early and is then reelected, they do not gain a fresh four-year term, but rather serve out their current term. In Osaka’s case, gubernatorial and mayoral elections were due in November.

On April 7, therefore, the entire local government is up for grabs: gubernatorial, mayoral, prefectural assemb and city council elections will take place simultaneously.

Currently, the Osaka Restoration Association leads all of these positions and chambers, but the national ruling party, the Liberal Democratic Party, is close behind, and the prospect for a twisted local government to emerge after the elections is very real.

The scenario for minimum disruption of the current IR plans would be another sweep by the Osaka Restoration Association, but even then there would be a new governor, Yoshimura instead of Matsui.

The Liberal Democratic Party has moved quickly to ask actor Takuro Tatsumi to be its candidate in the Osaka gubernatorial race.

There are two factors that ought to comfort Yumeshima IR advocates. First, the only real threat to the Osaka Restoration Association comes from the Liberal Democratic Party, which is also a conservative party and has no ideological objections to the legalization of casino gambling. There is no realistic chance that anti-casino, left-leaning parties will come to power in Osaka at this time.

Second, the Osaka business community is already deeply committed to the Yumeshima development plans and can be expected to push whichever conservative politicians win to go forward with the existing plans.

Your Daily Asia Gaming eBrief: The need for convergence

Macau - January 4, 2021
MGM Resorts has thrown its cards into the online gaming ring, with an attempt to buy U.K.-listed Entertain for GBP11.3 billion ($15.4 billion), which may reshape the group and reduce its focus on Asia in the longer term.

Elsewhere - January 7, 2021
MGM Resorts has announced that Jonathan Halkyard will become Chief Financial Officer for the global gaming, hospitality, and entertainment organization. Halkyard is a senior corporate executive who spent 13 years in leadership roles at Caesars Entertainment and was more recently the President and Chief Executive Officer of Extended Stay America, Inc. and ESH Hospitality.