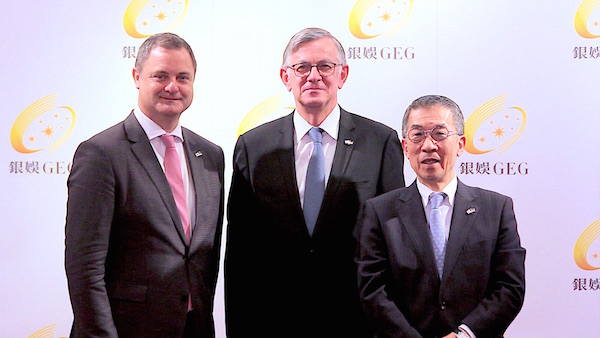 Galaxy Entertainment Group held a press briefing in Tokyo on Tuesday, led by Jeremy Walker, Galaxy’s vice-president of international development, and featuring Patrick Medecin, the ambassador of the Principality of Monaco to Japan.

Ambassador Medecin’s support for Galaxy’s bid to build an IR in Japan is connected to the fact that Galaxy is working in partnership with Société des Bains de Mer (SBM), the owner-operator of the Monte Carlo Casino and many other properties within the principality and beyond. If Galaxy is successful in winning a Japanese bid, SBM will also participate as a partner.

“We present here,” the ambassador explained to the gathering of about a dozen Japanese journalists, “the joint offer of one company, Galaxy, and one company, SBM, but with the back-up of one country that you know. It is Monaco.”

Walker added, “We are the only IR operator that has two gaming industry partners, and we feel that is an advantage because it gives us the best of Asia, the best of Europe. It really gives us an international footprint that brings something unique to Japan that other operators do not have.”

The press briefing was held at Tokyo’s Okura Hotel, which is itself a partner of the Galaxy Entertainment Group. It is perhaps not insignificant that there is also a branch of the Okura Hotel at the Huis Ten Bosch theme park in Nagasaki, which is one of potential IR sites that Galaxy appears to be eyeing. The Huis Ten Bosch Okura Hotel, however, is owned by a subsidiary of the JR Kyushu Railway Company.

A video excerpt of Ambassador Medecin’s presentation can be viewed here.

Pacific Islands - February 9, 2021
Sixteen Turkish nationals who are former workers of Imperial Pacific International, whose H-2B visas have already expired, have left the CNMI, even though the firm still owes them five months’ back pay.

Pacific Islands - February 11, 2021
Governor Ralph DLG Torres praises Imperial Pacific International’s decision to hire former Saipan senator Ray N. Yumul as its chief executive officer, saying it is “humbling” to have a CEO who is from the CNMI.